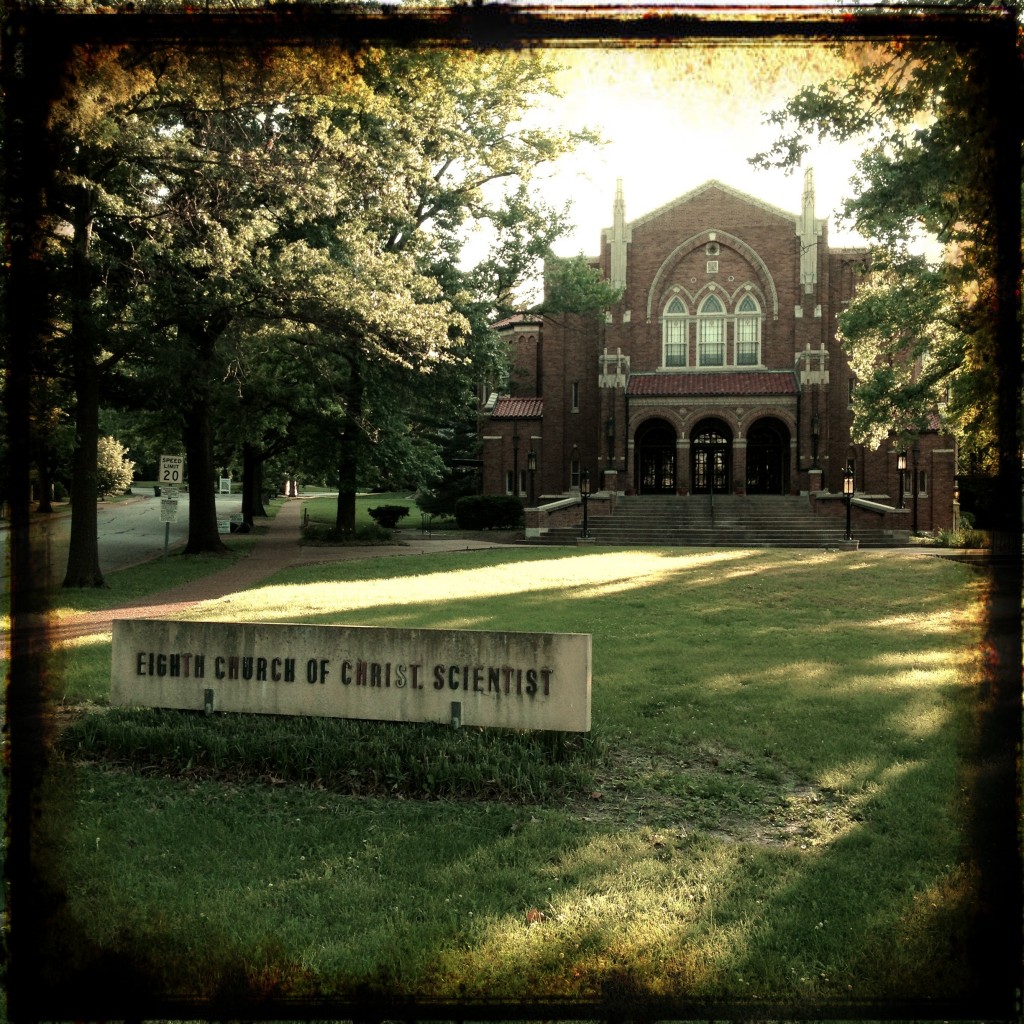 This is the corner of Skinker Boulevard and Wydown Boulevard on the western edge of Forest Park in St. Louis. At the World’s Fair in 1904, a large man-made lake existed on this exact location. It was called the “U.S. Life Saving Exhibition Lake”. The Coast Guard used it to stage life saving techniques during the 1904 World’s Fair. The lake was also used to host the swimming, diving, and water polo competitions during the 1904 Olympics.

In the 1904 Olympic swimming program, thirty-two participants from five countries competed. A total of nine events were held from September 4 until September 7, 1904. Only men were allowed to participate.

Unlike many events at the St. Louis Olympics, swimming was well represented internationally. It’s also one of the few sports where American athletes didn’t dominate the podium.  The Germans, led by distance swimmer Emile Rausch, won four gold medals. The Americans won three.

The 1904 games also introduced a few key innovations to Olympic swimming. It was the first time a swimming relay race was held in an Olympics. The breaststroke made its Olympic debut.  St. Louis was also the only Olympics at which swimming distances were measured in yards, not meters. 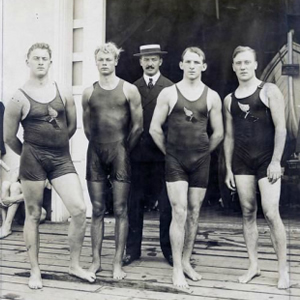 One of the better stories from the swimming events is the brawl that broke out after the 50 yard race. A man named Zoltan Halmaj of Hungary seemed to win the event, but a U.S.  judge stepped in and declared American J. Scott Leary the winner. The argument became so heated the two teams started slugging it out.  After tempers cooled, it was decided to re-swim the race. After two false starts, Halmaj won by a full stroke.

Diving also made its Olympic debut in 1904. Two diving events were contested on September 4 and 5.  Seven divers from the United States and three divers from Germany competed.

The main event was called “Fancy Diving”. Like swimming, it wasn’t without controversy. The bronze medal was initially awarded to an American, but the Germans protested, proclaiming the German dives were “fancier”. The Americans claimed they had better entries into the water, an aspect of the sport the Germans weren’t concerned with. A dive-off for third was proposed, but the German competitor, Alfred Braunschweiger, refused to participate. The bronze medal was awarded to the American.  However, the International Olympic Committee  reviewed the protest two years later. The result was overturned and third place was declared a tie. To this day, the United States has not acknowledged the decision. 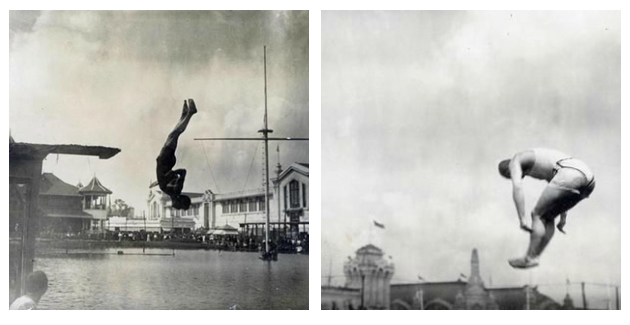 The other diving event was the “Plunge for Distance” competition. In this event, a diver plunged head-first into the water from a platform. Without using propulsion from the legs or arms, the distance of the dive was measured after sixty seconds, or when the diver’s head broke the surface of the water. William Dickey of the United States won the event with a dive of 62 feet 6 inches. Plunge for distance was actually a popular sport at the time, but the event made it’s only appearance at the 1904 games. 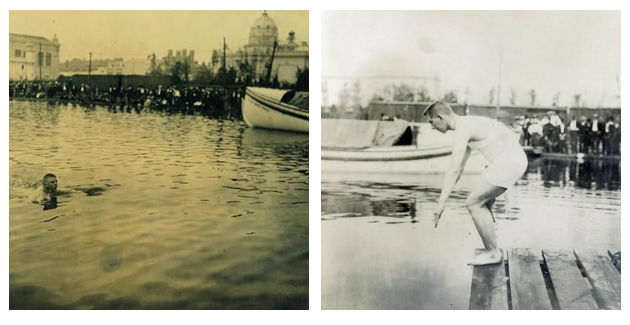 The water polo competition was also held in the Life Saving Exhibition Lake. Although recognized by the International Olympic Committee, many historians believe the 1904 results should not be considered official because only American teams participated. The event was held on September 5 and 6, 1904, with the New York Athletic Club beating the Missouri Athletic Club for the gold medal. A sad footnote followed the water polo competition. The artificial lake was also used for many agricultural exhibits at the World’s Fair. Cattle from these exhibits often wandered into the lake, ultimately polluting the water. The water quality became so poor that many of the athletes became severely ill after the competition. Four water polo players died from typhus within a year. 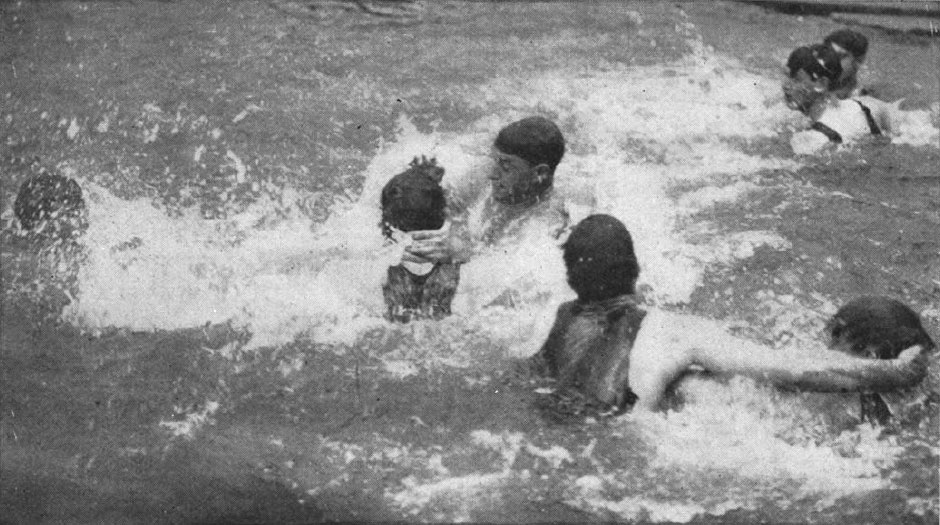 To go along with the Olympic theme of this post, another Olympic cocktail was served up. Here’s a recipe for “The Olympic Cocktail”, which I found on a few different mixology websites.

The recipe is pretty simple.

Fill a mixing glass with ice cubes. Add the ingredients and stir. Strain into a chilled cocktail glass (I added the slice of orange for a bit of visual appeal).

I planned to drink a few of these while was watching the Olympics with my mother back in upstate New York. However, my hometown was still dealing with the effects of the tornado that hit the day before. Cable was back on, but it would cut out often during the day as repairs were made around the city.

We kicked back and had a couple Olympic cocktails anyway. The reviews were mixed. My sister seemed to enjoy it, but the drink is orange… VERY orange.  I generally shy away from fruity drinks, so it was a bit much for me.  My mother had one and moved right on to her standard dry martini. I went Manhattan (of course).  For any readers who’d like to try the drink, I suggest cutting back on the orange juice a bit. Put more cognac in it.

Actually, cognac is a spirit I don’t have much experience with. I know it’s a variety of brandy, but I’ve never mixed it in a cocktail. My mother had a bottle of very cheap stuff in the cupboard.  On a lark, we had taste test between that and the Courvoisier (supposedly a very good brand). We all thought the Courvoisier had a better aroma, but the cheap stuff tasted better. Add cognac to my list of things to learn more about.

In conclusion, Here’s a photograph of some of the tornado damage that hit my hometown.  I think I should count myself lucky if missing some Olympic coverage is all I can complain about. 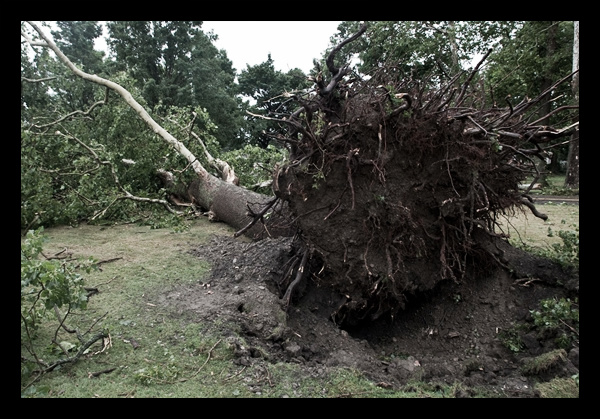